The Ecological Rights Foundation and Our Children’s Earth joined the group in filing the lawsuit. 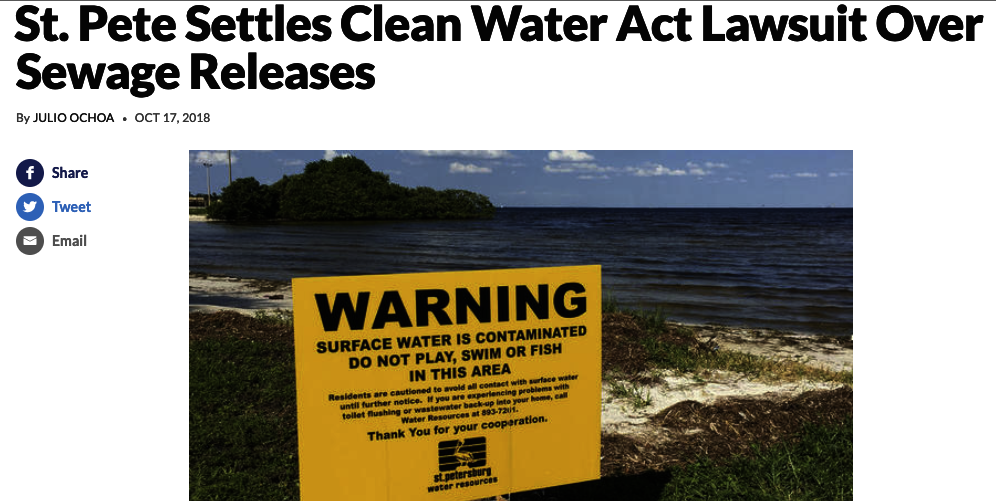 Two years after the City of St. Petersburg sent hundreds of millions of gallons of raw sewage
into Tampa Bay, the city and three environmental groups that sued over the pollution have
reached a settlement. Suncoast Waterkeeper, Our Children’s Earth, and EcoRights filed the
Clean Water Act citizen suit in late 2016, insisting that St. Petersburg commit to more specific
and aggressive measures to fix its beleaguered sewage system in order to prevent recurring
sewage spills into neighborhoods and Tampa Bay Area waters. Sewage is extremely dangerous
to human health and causes a number of devastating impacts to ecosystems and wildlife.

To settle the lawsuit, the parties agreed that the city would request an amendment to its previous
“consent order” with the Florida Department of Environmental Protection (“FDEP”), that the
amendment would contain additional work commitments, and that the original consent order and
its amendment will be enforceable by the federal court. In addition to the new work
commitments, the city also agreed to a $200,000 payment to the Tampa Bay Estuary Program to
be used for projects to benefit local ecosystems. This settlement package was approved by the St.
Petersburg City Council at its October 4 meeting after being discussed at length at the August 9
meeting. Mayor Kriseman signed off on the amendment shortly thereafter, and FDEP officials
added their signatures last Friday. Today, attorneys filed the settlement along with a joint
stipulation to preserve judicial oversight. The court still needs to approve the settlement package.

Long-term court oversight was a key demand of the environmental groups, which insisted that
St. Pete residents should have the ability to seek a court order if the city gets off-track with
planned sewage system work in the future. In addition to court enforceability, the settlement adds
several commitments and requirements that were not present in the city’s original consent order
with FDEP; for example:

Justin Bloom, Suncoast Waterkeeper: “Our citizen suit was essential to making sure that St. Pete
fixes its beleaguered sewer system and stays on track in the years ahead. Political winds may
shift and different individuals may be at the helm of the city government. But maintaining
functional sewage infrastructure is critical to the health of our ecosystems, our communities, and
so many businesses that rely on clean water and healthy estuaries in the Tampa Bay area. The
consent order amendment that resulted from this case includes language clarifying that St. Pete
won’t be excused from complying with all of the requirements and timelines for improving its
infrastructure if the city fails to budget or appropriate the needed funds. This is crucial to
ensuring continued work and progress over the long-term, even if changes in city staffing and
budget priorities occur. Sewage pollution contains numerous dangerous pathogens, bacteria, and
nutrients that fuel algal blooms. St. Pete has already taken important steps toward improving its
wastewater system to be better prepared for large storms, and with this settlement the city proves
its willingness to prioritize sewage system fixes for many years to come.”

Tiffany Schauer, Our Children’s Earth: “One of the most important factors which led to our
current infrastructure crisis is the fact that local municipal governments are in many ways illsuited
to manage issues like wastewater infrastructure. Sewage system failures are often decades
in the making, and most of the time the pipes under our streets are out of sight / out of mind. Due
to political term limits, electoral timelines, and limited financial resources at the city level, we‘ve
seen local governments throughout Florida and the United States falling far short of the task of
maintaining critical infrastructure. St. Petersburg became a poster child for this problem back in
2016, when the city sent massive amounts of raw sewage into Tampa Bay Area waters. Now, St.
Pete can be a national leader in showing what is possible when there is a genuine long-term
commitment to fixing antiquated sewer systems, with public transparency along the way and
court oversight to guarantee the job gets done. Our Children’s Earth has been engaged with the
issue of sewage pollution for more than a decade. Each city is unique, but there is never a quick
fix. This is why we insist on court oversight particularly in the worst cases, where the public
loses trust that its government will be transparent about infrastructure and pollution problems.”

Frederic Evenson, EcoRights: “This agreement is a win/win for St. Petersburg residents, Tampa
Bay ecosystems, local business owners, and even for members of the city government, who can
move forward with necessary system improvements without being concerned they will be
derailed by misallocated funding or political pressure in the future. We worked with the city to
keep everything as clear and simple as possible for city staff and residents. Because the city also
agreed to court oversight, the settlement is functionally the same as a ‘consent decree,’ which is
how federal Clean Water Act lawsuits are usually resolved. In this case there’s actually an added
layer of accountability as FDEP will maintain its authority to enforce all of the terms of the
consent order and the new amendment.”