Welcome to SCWK's site to provide information on water quality within the Manatee and Sarasota area. Please use this information to make educated decisions on recreational use and policy.

The Florida Department of Health’s Healthy Beaches program currently tests for bacteria levels on a weekly basis at Gulf beach locations. However, many popular recreation locations, particularly in our Bay areas, are still not monitored.

Therefore, through generous grant funding and sponsorship, including funds from both the Sarasota Bay Estuary Program and the Coastal & Heartland National Estuary Partnership (CHNEP) Suncoast Waterkeeper now monitors a minimum of 12 sites biweekly for bacteria levels where recreation occurs but testing is lacking.  We collect these samples at the same locations and process the samples at Benchmark EnviroAnalytical, Inc.

Lab results take approximately 48 hours to complete. Data collection is typically done on a Tuesday and results are posted by Friday. You can view all our laboratory results at this link.

Enterococci are enteric bacteria that normally inhabit the intestinal tract of humans and animals. The presence of enteric bacteria can be an indication of fecal pollution, which may come from stormwater runoff, pets and wildlife, and human sewage. If they are present in high concentrations in recreational waters and are ingested while swimming or enter the skin through a cut or sore, they may cause human disease, infections or rashes.

According to studies conducted by the EPA, enterococci have a greater correlation with swimming-associated gastrointestinal illness in both marine and fresh waters than other bacterial indicator organisms, and are less likely to "die off" in saltwater. If an enterococci result were observed to exceed 70 colony forming units per 100 milliliters of marine water sampled, then an "Advisory" sould be issued for the sampling site. Suncoast Waterkeeper will continue to monitor sites that are consistently poor and follow up with appropriate notification to local officials.  See our Sick of Sewage Campaign and success stories.

Florida Department of Health recommended categories are as follows.:

How do I find the latest water quality information? Check out Swim Guide! 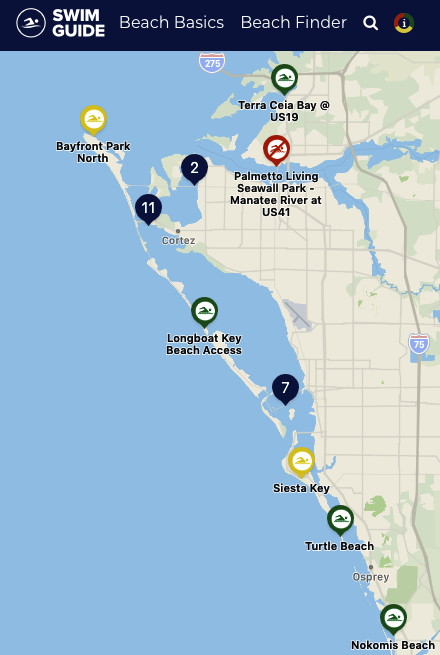 The results of our sampling efforts will be posted on this website, via our social media platforms, and our SWIM GUIDE. You can also visit the SWIM website to view all worldwide locations here and download the app here.

The website and app that will help you to identify at a glance which beaches are safe for swimming (Green) and which have current water quality problems (Red). Swim Guide offers an intuitive, easy-to-use interface that lets you see a map of beaches in your area and their current water quality status.

Swim Guide will also let you:

Suncoast Waterkeeper Water specific sampling data from our testing lab is available to the public by clicking here. Our map also provides a  history of the sampling locations.

There are many HAB species in the Gulf of Mexico—Karenia brevis is Florida’s most common red tide organism. Dark red or brown, sometimes with a yellowish tint, this red tide produces brevetoxins that can kill marine animals, and make land animals and people sick. If you’ve been around red tide, you may have had the “red tide tickle”: the itchy throat and cough caused by breathing in brevetoxins that have been released into the air and water when wind and waves break open the cells of the algae.

SYMPTOMS? Stay away from red tide.  Even if you’re not prone to respiratory issues you should be careful: these toxins can cause breathing problems, and can irritate your eyes, nose and throat. Reactions to red tide are worse for people with asthma, emphysema, bronchitis or any chronic lung disease. If you have health issues, stay away from areas with red tide. Pets can become sick from red tide so keep them away from those areas, and contaminated marine animals and fish.

If you come into contact with red tide, wash off with soap and water. You can get relief from respiratory symptoms by being in an air-conditioned space. For people without asthma or chronic respiratory problems, over-the-counter antihistamines can help. If your symptoms don’t get better, see a doctor.

SWIMMING  Don’t swim in or around red tide because the toxin can cause skin irritation, rashes and burning and sore eyes.

DEAD FISH  Red tides can kill fish and other marine life—avoid contact and don’t swim or walk in these areas. Keep your pets away from these areas.

RED TIDE AND FISH  Don’t harvest or eat distressed or dead fish (or any animals) from or near a red tide. Fish caught live and healthy can be eaten if filleted and rinsed thoroughly with fresh water.

RED TIDE AND SHELLFISH   Check local harvesting status at Florida Department of Agriculture and Consumer Services. Crabs, lobsters, shrimp, clams, oysters and scallops are filter feeders that can concentrate toxins—these and other shellfish, if harvested from red tide areas, can be contaminated with brevetoxins. The muscle of the scallop is free of toxin but the rest of the scallop is not (recipes using scallop muscle are safe to eat). Your safest choice is to not harvest or eat shellfish from affected areas.

You could suffer from Neurotoxic Shellfish Poisoning (NSP) if you eat contaminated shellfish. NSP symptoms include: nausea and vomiting; tingling of the mouth, lips and tongue; and slurred speech and dizziness. Neurological symptoms can progress to partial paralysis and respiratory problems.

In water bodies with blue-green algae, if people or animals splash or if boats create wakes, the cyanotoxins in the algae can release into the air. The toxins mix with water droplets and spray—that’s how people and animals can inhale the toxin. These toxins can’t pass through your skin easily so swallowing large amounts of contaminated water is what causes illness. This algae is blue, bright green, brown or red, and can have a strong odor like rotting plants. Pets can become sick from blue-green algae so keep them out of those areas and away from contaminated marine animals and fish.

SYMPTOMS? Stay away from blue-green algae.  For some people, blue-green algae can cause rashes, stomach cramps, nausea, diarrhea and vomiting. People who are very sensitive to smells can have respiratory irritation. Sometimes, high exposures of toxin can affect the liver and nervous system.
If you come into contact with blue-green algae, get out of the area and wash off with soap and water. See your doctor if you think blue-green algae has made you sick.

CONTAMINATED WATER  Water from areas with blue-green algae can make animals and people sick—stay away from these areas.

SWIMMING  Don’t swim in or around blue-green algae.

BLUE-GREEN ALGAE AND FISH  Fish tested from water with blue-green algae show that cyanotoxins don’t accumulate much in the edible    parts—muscle or fillet—of fish, but can in other organs. Rinse fish fillets with tap or bottled water. Throw out guts. Cook fish well. This algae produces toxins that could impact your health. Click here for some research on this toxin.