FDEP has yet to complete a comprehensive, statewide assessment plan on Florida's existing two dozen or more phosphogypsum stacks. These stacks remain as a toxic legacy of the phosphate industry.  Each phosphogypsum stack carries with it the risk of creating another Piney Point environmental and financial fiasco.

Over 2 years ago the alarm was sounded  - "The contaminated water stored at Piney Point certainly raises the question: Can a limited liability corporation such as HRK Holdings adequately manage and operate Piney Point in an environmentally sound manner? Right now, the answer appears to be no. "( The Bradenton Times, Glenn Compton, Sunday, Dec 09, 2018)

The current failure at the Piney Point facility owned by HRK was preventable. FDEP knew of the failures of the liner not only at Piney Point but at other phosphogypsum stacks. FDEP failed to protect the environment so many of us work hard to protect.

Our community and environmental organizations need assurances by the State of Florida, our Governor, and the Secretary of the Environmental Protection Agency, the Senate and the House that this failure will be handled promptly with the utmost caution and assurances that future failures will be averted by enlightened leadership

This disaster was preventable. Permit conditions were ignored, water accumulation was not addressed when state funds were available to remedy the conditions.

As Waterkeepers we work hard to ensure our community rights are protected for clean waters, for fishable waters, for boatable waters and also drinkable waters. We have been greatly disappointed that the rights of the people of Florida have been jeopardized by the failure of our State.

WHAT WE ARE DOING: 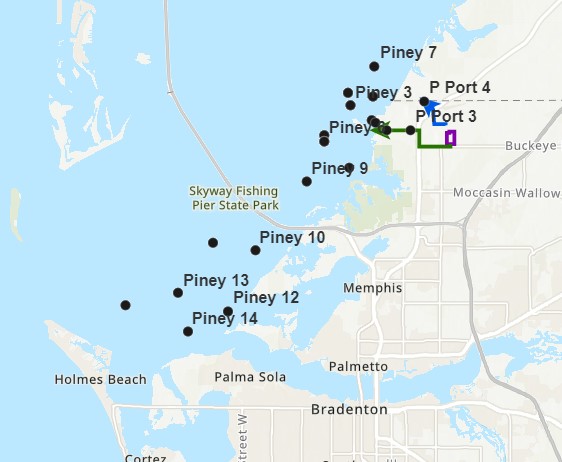 WHAT IS IN THE WATER?

The current discharge of water far exceeding water quality standards for the Tampa Bay Estuary is delivering mainly excess nitrogen and phosphorus to Bay waters. According to FDEP the water is not radioactive above normal levels since their is radioactivity in almost everything even bananas. FDEP states "The water meets water quality standards for marine waters with the exception of pH, total phosphorus, total nitrogen and total ammonia nitrogen. It is slightly acidic, but not at a level that is expected to be a concern. "

IS THE WATER HARMFUL?

Both nutrients are known to fuel harmful algae blooms such as red tides.

The nitrogen content of the water being discharged is above 200 mg TN/L.  That is about 100 times higher than urban stormwater runoff, about 100 times higher than the processed sewage what we know as reuse of treated wastewater discharges, and about 10 times higher than raw sewage (varies a bit).
As of April 5th 2021, there was discharge of about 100 million gallons.  At the concentration measured (of the discharge) that results in about  1 ton per million gallons, so it was about 100 tons discharged to the bay.  An 18 lb bag of Scotts Bonus S has a formula of 29-0-10, which means 29% of its weight is nitrogen, or about 5 pounds.  The loads to the bay were about equal to 40,000 bags of fertilizer.  If they drain down the entire volume of 480 million gallons, and the concentration stays the same, it will equal almost 200,000 bags of fertilizer added to the bay in about a week or so.  Not good - at all.  We're lucky if it doesn't spread down into Sarasota Bay from Tampa Bay, and lucky if it only sets us back years, not decades.
IS THE WATER BEING DISCHARGED REALLY TOXIC?
There are too many people and news outlets calling the water toxic creating a perception of a serious industrial toxic water release. It is not! The water being discharged is water fish for years have been living within this cell within the  phosphogypsum stack from where the water is being discharged. The water is primarily left over bay water from the dredging and rainwater. THE WATER  DISCHARGED TO THE BAY AT THIS TIME IT IS NOT RADIOACTIVE OR ACIDIC INDUSTRIAL PROCESSED WATER. The cells were lined  before the dredged material was placed inside. At the most, any suggestion as to the water being toxic  would be from a secondary impact of too many nutrients. The excess nutrients will impact the water in and around Tampa Bay with the most likely scenario causing an algae bloom such as a red tide or another harmful algae bloom. Fish could primarily die off from the lack of oxygen and toxins caused by this Algae.
IS THE WATER BEING TESTED?
Yes. Statewide DEP staff across divisions continue to monitor and sample water quality in this area daily. This monitoring includes sampling to determine changes in salinity, dissolved oxygen, clarity, nutrient levels, turbidity, radionuclides and other variables that will determine any changes in baseline water quality status in this area.  According to FDEP as of April 6th, dissolved oxygen, salinity and pH all meet water quality standards.
HOW MUCH WATER IS SENT TO THE BAY?
More than 35 million gallons per day are being removed from the NGS-South compartment through these combined water activities.
SHOULD I BE CONCERNED ABOUT EATINF FISH OR KAYAKING IN TAMPA BAY?
At this time there is no indication from water samples the fish are unsafe to eat or the water unsafe for recreation. The water is showing signs of increase in chlorophyll which is expected since the plant life in the water will feed on the extra nutrients.
IS THERE SEEPAGE FROM THE STACK?
There is one area of concentrated seepage from the east wall of the NGS-South compartment. DEP continues to monitor the area for any developments. The water from this seepage remains contained onsite in the facility’s lined stormwater management system.
INFORMATION ON THIS SITE IS COLLECTED FROM A VARIETY OF SOURCES BELIEVED TO BE RELIABLE AT THE TIME THIS SITE WAS LAST UPDATED APRIL 7, 2021 12pm
Do you like this page?
Tweet